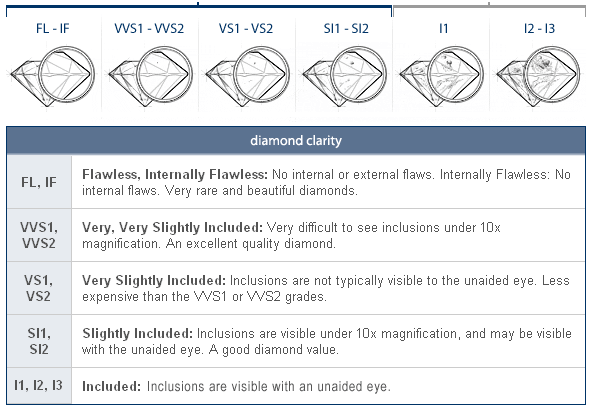 CLARITY Refers to the presence of inclusions in a diamond.

Inclusions are natural identifying characteristics such as minerals or fractures, appearing while diamonds are formed in the earth. They may look like tiny crystals, clouds or feathers.

To view inclusions, jewelers use a magnifying loupe. This tool allows jewelers to see a diamond at 10x its actual size so that inclusions are easier to see. The position of inclusions can affect the value of a diamond. There are very few flawless diamonds found in nature, thus these diamonds are much more valuable.

Inclusions are ranked on a scale of perfection, known as clarity, which was established by the Gemological Institute of America (GIA). The clarity scale, ranging from F (Flawless) to Included (I), is based on the visibility of inclusions at a magnification of 10x.

Some inclusions can be hidden by a mounting, thus having little effect on the beauty of a diamond. An inclusion in the middle or top of a diamond could impact the dispersion of light, sometimes making the diamond less brilliant.

The greater a diamond’s clarity, the more brilliant, valuable and rare it is – and the higher it is on the Diamond Quality Pyramid.